That’s the title of my research project, almost a year in the making now.

It was inspired by the Bechdel test for film and other tests that have since spawned. For those who don’t know, the Bechdel test is a (somewhat joke) of a test proposed by two characters in Alison Bechdel’s “Dykes to Watch Out For” in 1985. The rules are simple: 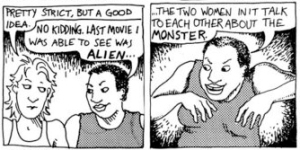 [two panel comic, two characters: “Pretty strict, but a good idea.” “No kidding. Last movie I was able to see was Alien…The two women in it talk to each other about the monster.”] Dykes To Watch Out For, 1985.

The test isn’t perfect–and wasn’t made to be. It was put forth to get people thinking about how few movies don’t actually stand up to such simple criteria. Of course, some very feminist films don’t pass (for reasons like a limited number of characters, setting restraints etc.) and some very non-feminist films do pass (for talking to each other about shoes, their periods, etc.)

Other tests, like the Narrative Bechdel Test and the Mako Mori Test add more to the discussion about just what makes a piece of media “feminist”–showing strong, capable female characters.

The purpose of my research is to devise a test of my own, specifically for superhero comics, and then apply it to 46 of the most popular female characters to see how they stack up.

Of course, some of the most feminist characters on the list might not pass all the criteria (in things like objectification, agency in their own plot, or being commonly linked to/derivative of a male character). I’m well aware of this fact. There are all kinds of reasons–for instance, many female characters were very weak and liable to fail the test if we only look at the first five, ten, even fifteen years of their existence. Comic books have come a long way.

However, the goal is to generate some discussion, to present a hefty booklet of research broken down into empirical data so I can stand at San Diego Comic Con (sweating nervously about talking about feminism at Comic Con) and say “hey guys, let’s think about this the next time we’re creating a character.”

The proposal itself was only 13 pages; considering each character gets a page for her coding sheet and probably another page of notes and annotations, the research presented will itself stack up to be around 90-100 pages by the end of the semester. I’d be lying if I didn’t say I was intimidated by that but hell, won’t that look good on a curriculum vitae?