My research side of my SDCC project is for the most part (97% done, just a few tweaks here and there) and the results are being compiled, analyzed, put into pretty color-coded charts and what have you. While doing my research and creating my coding sheets, however, I ran into some thought-provoking questions about my operational definitions for what I was analyzing, what lines were drawn or crossed. I thought it might be interesting to share them here and see if anyone else had input.

Some of the issues that came up, without spoiling all the fun of revealing my research at a conference:

In this case, I (and my advisers) ended looking at the context of the suit and the suit itself. Examples include Black Widow, Catwoman, and the Batgirls. It makes sense for all of them to wear sleek suits for their sneaky-spy-acrobat stuff, but there is an inherent difference between the Batgirls (Cassandra Cain and Stephanie Brown) 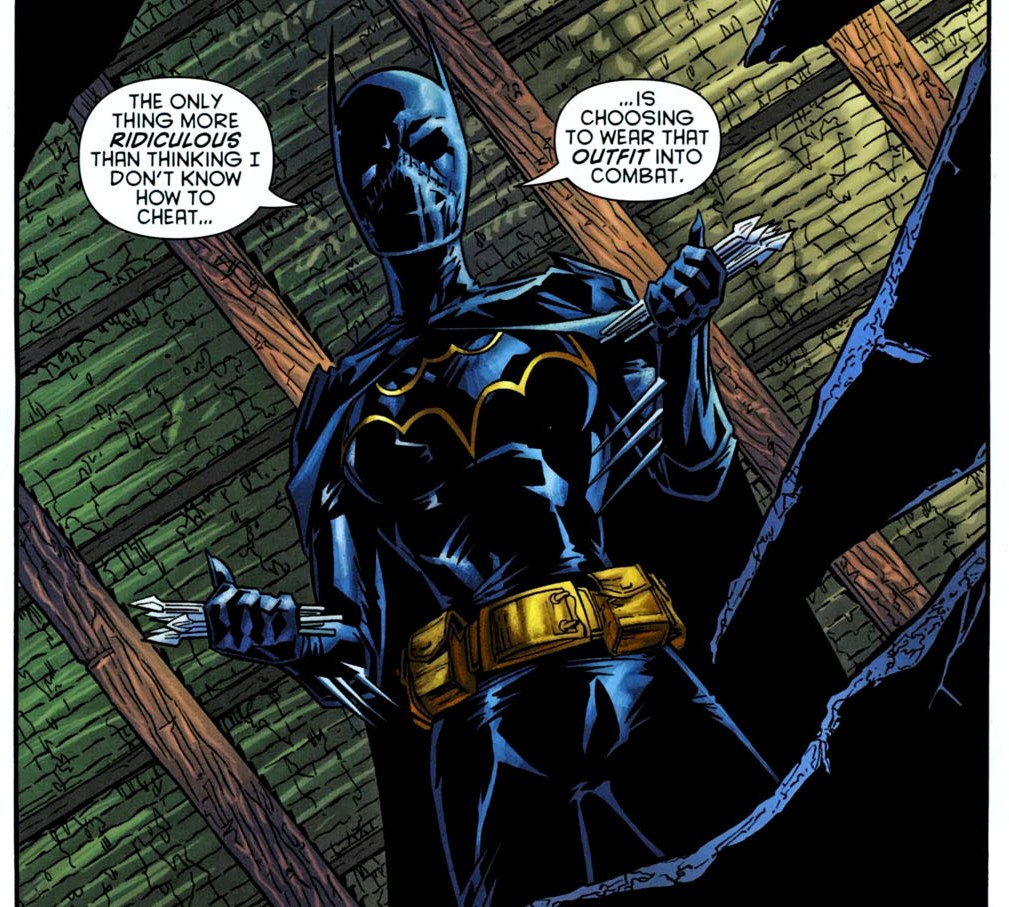 and it has a lot to do with cleavage but it’s more than just that. The latter two are frequently seen in various states of unzipped costume, which makes it even less practical than the catsuit would normally be. (Catwoman in the New 52 series caused some stir for just that exaggerated state of undress).

In short, it came down to the function for the job, the presentation of the comic. Do the Batgirls get drawn as more voluptuous than possible sometimes, with some of the same poses? Yes, but those are outliers rather than the norm.

Speaking of jobs and costumes, that brings me to my next point, with a convenient seque:

Zatanna, a magician both by supernatural and mundane terminology, did not get marked for over-sexualization, because her costume is fitting for her showgirl-esque show performer day job. There is, of course, probably MORE boob there than should be but she is not running around in her undies with no explainable in-character reason. 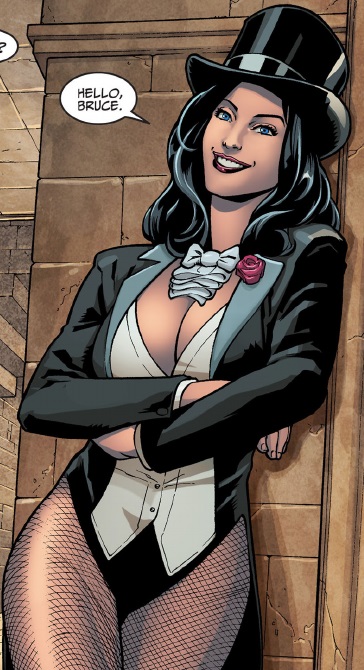 For reference, this question was in regards to Poison Ivy and Emma Frost.

Both are fairly inarguably classified as “femme fatales.” As a feminist, I struggled with two sides of an argument here:

b) Women are allowed to dress how they like and they should not be shamed for taking control of their sexuality.

Ultimately, option b won out, as did the thought process that almost no other heroine’s costume is explained in character–it’s the white elephant that we don’t speak about while men drool (or worse) over them. Pamela (Poison Ivy) and Emma are in control. While that may look a bit gratuitously like a man’s fantasy, what doesn’t in comics?

(And if only 2 of 50 characters in my analysis fell under this kind of deliberate temptress logic, I figured I could accept it as not just men man-splaining away their fantasies on paper.)

Does She-Hulk breaking the 4th wall to comment on the sexualization of her character and chastise her writers/talk to the audience count?

(We decided that if nothing else, it certainly deserved a mention in the discussion section.)

The cases that come to mind here include Scarlet Witch (as emotionally unstable) and Jean Grey and Psylocke (losing control of their powers) and Black Canary (losing her powers frequently). Polaris similarly often finds herself for whatever reason unable to use her powers.

I struggled with condemning Scarlet Witch just for being emotional, because who am I to condemn emotions? However, the other side of the coin is the question of whether or not that’s all just a play on women’s so-called emotional frailty.

In all cases, the verdict was that they were just plot devices in those cases, usually used to further the plots of others (especially males). In the case of Black Canary, she has her own plots too–like being in a kickass band (with actual can-be-listened-to music) but the thought still counts.

Losing their powers and suddenly floundering decidedly lowered their score in that area, as well. Some characters–like Mockingbird–spend the vast majority or all of their days on comic pages completely without powers. Oracle–Barbara Gordon–went her entire life without powers and managed to reinvent herself as a new hero even after the Joker paralyzed her from the waist down.

Similarly, it had to be clarified that being kidnapped frequently was not a condemnable offense by itself. Everyone in comics gets kidnapped or captured, male or female. The cases where it was condemnable, however, was when they were unable to free themselves and had to get help from others. (Wonder Woman passes here, as does She-Hulk and others. Supergirl and Raven do not.)

These are just a few of the fun road blocks I ran into in my categorization, but for the most part intent and portrayal seemed to win over what happened so much in script word for word. Have thoughts? Comment them!