This is as much a personal post as it is a post about research, nerd culture, comics, or anything else. Carry on.

Listen. It shouldn’t come as any surprise to people that nerd culture and those most vocal in it can be a bit…touchy.  (And yes, here, I’m totally talking about male nerds.) It’s the belief system that they are a small culture unto themselves, that newbies, the unenlightened, women can’t fit in. They had to suffer and fight and be bullied through high school or whatever so no one can join their club. (This is all nevermind the fact that nerd culture–video games, superheroes, comic conventions–are all becoming increasingly mainstream and popular to the general populous.)

Women especially get this bad. They’ll say we’re fake and doing it for attention–because who wouldn’t want a bunch of misogynistic men (the kind who believe this junk) drooling all over you, right? They make you prove yourself–name this obscure fact or that one or else you’re fake. Or they’ll praise us as these freakish special snowflake angels who are a gift unto the world. Either way, it’s wrong; we’re just nerds who happen to be female.

Minorities in the nerd world (women, people of color, LGBTQIA etc.) are often told to accept what is given to us–token roles, stereotypes or outright being left out–or get out. I’ve literally been told before that if I don’t like a show/movie/book, I don’t have to watch/read/whatever, as if giving up and dropping something was ever that easy. As if that ever solved anything.

(I’m going to pause here and insert a zillion links for more about these mentioned phenomena like entitlement, suggestions on how to get around it, the fallout and effects of it etc. for the uninformed. It’s gotten so bad it’s lead to death threats–check out info on Gamergate. GQ has talked about angry nerds and so has Youtube wonder Albinwonderland in what is possibly the best video ever. People just keep talking about how sensitive nerds get and how elitist they can be.)

Gives me chills every time.

Now that that’s out of the way, here’s why I’m making this post right now today (when it’s relevant every day of my nerd girl life).

I’ve just finished pretty comprehensive research into the representation of women in comics, and their roles.

I look at things that are the most raw sensitive spots of female representation: the skimpy costumes, the Bat-GIRLS and HawkGIRLS based on BatMAN and HawkMAN and the deritivitive-ness of it all. I look at sexual violence and victimization and the reduction of women to plot devices for men a-la Women in Refrigerators.

Spoiler alert: the findings aren’t super flattering about how we’re written in the big 2 (DC/Marvel) universes.

I LOVE comics. I wouldn’t be minoring in studying them, wouldn’t have over 100 hours into this research, spend my spare money on them, run this blog, care at all if I didn’t love them.

I read comics because I think they can be a positive outlet, a responsible medium, and a fair vocalization for social change and positive role models for men AND women, you fuckwitted halfbrain mouthbreather.

I get so passionate about this shit that it honestly brings me to tears…and I’m presenting it at Comic Con International in San Diego, the forum for this kind of stuff. The biggest of big leagues that I will ever get to, for sure. It’s hard not to feel inspired, proud as fuck, overwhelmed, emotional, and terrified.

Istarted reading comics and delving into the worlds only pretty recently (well, about 8 years but on and off). I can’t win a random-trivia-fact-off with a guy who’s grown up in a comic book store. Do I know my shit about my research? Of course, I’ve spent days and days reading the entirety of a character’s continuity, tracing factors throughout. I know about X-Men, I know about Avengers, I know about JLA/JLS/its many iterations. It’s still hard to not cringe at the thought of some guy coming up to me and asking about some obscure one-shot in the 1970s as a way to “test” me, though.

I know that nothing will ever change unless we talk about it. Scholars, readers, creators, we all have to stand up and not settle for scraps. As a person, though, I’m not sure why I woke up one day and decided to slap that burden on myself. I like to hope I can do it. I won’t be alone–my advisers Dr. Langley and Dr. Duncan will be there to rescue me if any belligerent ass starts tearing me apart unfairly and I think the other presenters would too. However, I’m not a confrontational gal. Why did I choose to carry this cross?

I guess because the more people who do, the lighter it gets.

P.s. My absolute idol Gail Simone agrees. (You bet I freaked out when she replied.) 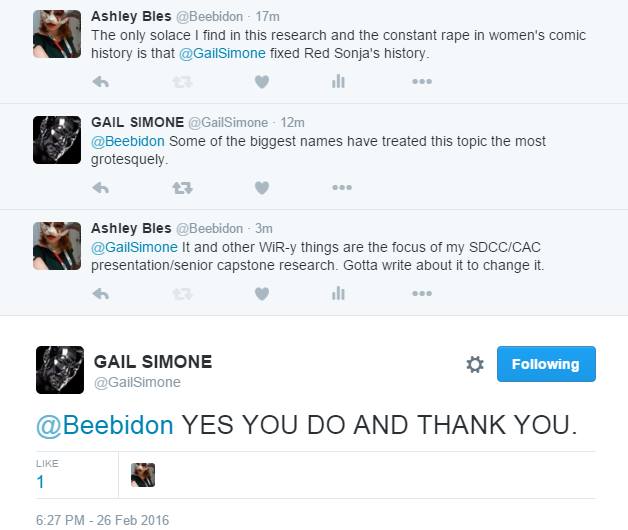 P.s.s. Alb gets two links in this post–she says everything I could ever say about the importance of being critical of things you like in this video.