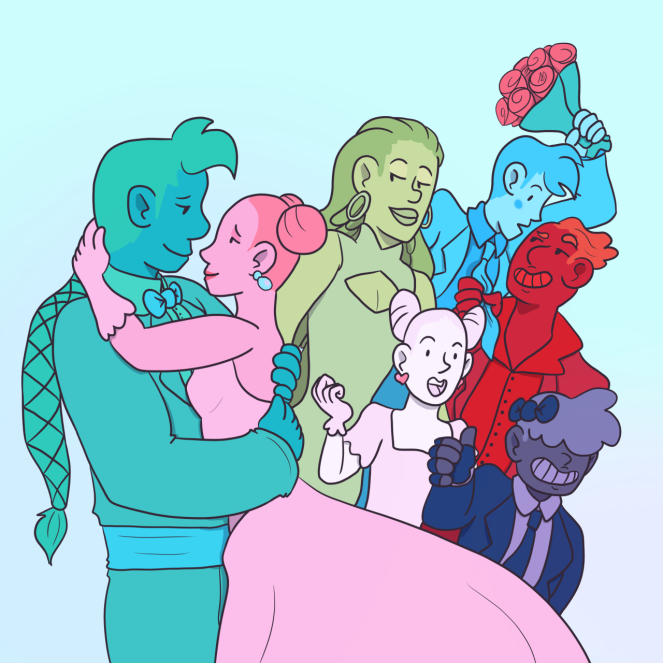 “My name is Merriam (@Starkillerarts on twitter) and my online handle is Star Seed Dreamer. I’m a 25 year old lesbian living primarily in the midwest. I post most of my comics on tapastic and I also have a tumblr where I post pretty much everything I draw.”

What do you do? (Write, draw, edit, publish, promote etc.)
How did you get started doing that?

I write and draw my own comics. I actually wanted to be an animator and went to school for that, but during my college days I decided to get started on my own comic projects so I could get my stories out there.

My first webcomic project was Desert Grey and it’s still going because I haven’t reached the end yet. Making pages is a slow process for me. It’s a story that’s very near and dear to my heart that I started writing in highschool and then refined it later in my early twenties. To sum up it’s the story of a lesbian ex cop and a gay biracial alcoholic joining a resistance cell to overthrow the government.

Any current or upcoming projects we can find you on?

On top of Desert Grey I’m also working on a more light hearted series called Wrong Hand. It’s a story set in a world where people find their soulmate via matching hand marks and the societal convention states that men have their marks on their right hand and women on the left. However we quickly learn that as pushed as this idea is for many people it simply isn’t true. Lefty the protagonist has his mark on his left hand and there are characters with marks on both hands or no mark on either hand.

Currently I’m just making short jokey comics about the characters that populate this world, but I hope get started on longer more involved stories soon. There’s also a comic a friend of mine and I are writing together called Cat’s Inheritance. This story is about a witches cat who can turn himself into a human who then inherits the property belonging to the witch after she dies.

Favorite inspiration, collaborators, other professionals you’ve worked with if any?

E.K. Weaver and Jess Fink were both big influences on me not just artistically, but with the kind of stories I wanted to tell. When I was in highschool “The Less than Epic Adventures of TJ and Amal” was being conceived of by Weaver online. I was excited for every sketch comic she’d post. Jess Fink was an artist I discovered a couple years into college during my Summer of Depression 2011. Her work was greatly comforting to me and I loved her style.

Anyone you’d like to collaborate with some day? Why?

I’d be excited to collaborate with anyone really. I have some experience with collaborating with the creator of the webcomic Space School, but I’ve only shared the work load of writing and art full on with my friend Robert Bradley.
Favorite genre to read? To work in? Are there any you won’t work in?

I love reading just about anything as long as it has a comedic bend to it. I do like serious stories, but I don’t believe that a heavy story can’t have comedic moments or vice versa. Personally I’m a better romance and comedy writer than action writer. The only thing I probably wouldn’t do in my work is get into super gritty violence. Mention it perhaps, but never full on depict it.

Have you ever faced adversity/discouragement for being a woman in your field? How did you overcome it?

My family is very discouraging mostly because they fear I won’t make money. They also think my own ideas won’t be relevant to anyone else because most of my ideas involve LGBT characters. I’ve also had teachers who didn’t like anything LGBT related being mentioned in my work. Honestly, spite is a great motivator to keep doing what I do.

(Buy this print and more on their Redbubble!)

Coolest moment you’ve had as a creator?

Whenever I talk to people about my comics that I’m working on and I get the impression that they’d genuinely interested in them. A lot of the time people tend to brush me off because they view comics as juvenile or something, but when someone get’s engaged and starts asking me stuff about them I feel like making them is worthwhile.

What can we do to improve the current comic scene further and create a safe space for women?

Honestly I think that we need to start taking a woman’s word for it if she talks about being harassed or being skipped over by publishers. There’s so much pressure to provide evidence of situations being unsavory on a woman’s part, but even if there is evidence people will still be skeptical because the person she’s accusing bought them french fries once so he can’t be all bad. Or something like that.

Who are some of your favorite/most inspirational female characters to read? What about in other media (novels, TV, movies, pop culture)? Why?

Sister Claire is probably one of the best female heavy casts (I think there’s maybe one or two named male characters) comics I’ve been reading recently. Also I love everything even vaguely connected to magical girls so the Crystal Gems from Steven Universe get a big plus from me.

What do comics mean to you?

Comics are a medium that allows for very expressive storytelling in a way that is wholly unique. Animation is very important to me too, but comics can be more personal stories for artists since you don’t always need an entire team of people to create them.

Advice to other female creators in the field?

When making a comic create the story you want to see in the world. It doesn’t have to be a certain kind of story just because you’re a woman of any kind, but make something that you’d want to read yourself.

What are you currently reading?