What a week, what a week! As the end of the semester gets closer, I become less and less active here because of work and projects (apologies). On top of that, however, I had the IMMENSE pleasure of getting to talk to not one, not two, but three esteemed comic creators in the past week.

Andy Warner  visited and spoke to our class, then was joined by Sonny Liew the next day to offer critiques to students in my nonfiction comics class. 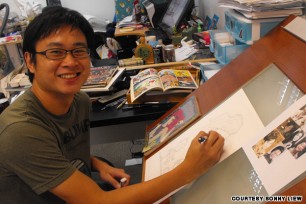 Finally, today, Scott McCloud joined that list, talking with our class and staying for a few hours later to add his feedback to projects. 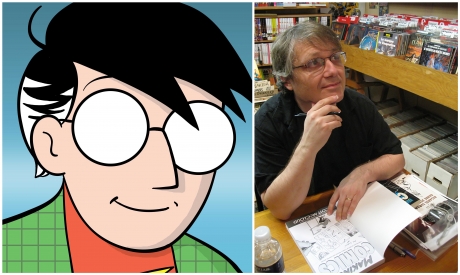 All three gave invaluable feedback, especially to this gal who is not a comic creator by trade. (Layouts are the bane of my existence and sadly the last thing on my mind when forced to create, despite the fact that it should probably be one of the first.) However. most of this post will be waxing fangirlishly about Scott because I absolutely adore and am enamored by this charismatic comic scholar.

(By the way, look for the comic that was critiqued by all 3 to be up some time in the coming weeks…it’s a work in progress and a zillion revisions. It’ll be a good comic by the end of it, I swear!)

In 1993, Scott McCloud became one of–if not the–first people to analyze comics as an art form by publishing Understanding Comics. In it, he talked about why certain panels and pages worked, why some didn’t, and why and how art could be incorporated into the comic form. He talked about the marriage of words and images and gave us a working definition for what a comic is (“Juxtaposed pictorial and other images in deliberate sequence, intended to convey information and/or to produce an aesthetic response in the viewer”). He boldly tackled the psychology and communication logistics of comics and looked at it as a serious form.

Since then, he’s looked at how technology changes comics–including the effect of the internet on comics, and branched out into analyzing how presentation of images (including form, color, line, and movement) and words can affect everything from app development to video games and computers.

Scott’s work was so effective probably because he taught about comics in comic form. This also loaned itself to tons of awesome diagrams about how comics work (and trust me, I love diagrams).

Here is a diagram about realism in comics with TONS of examples as to how much it leaves things open to interpretation or not. I linked to it because it’s too big to do justice here, but it’s seriously cool.

Here’s a TLDR of it though:

Below is a diagram of the path that a comic takes through inception to finalized creation and distribution:

He also talked about gutters, the shape of panels and layout on the page, and the magic that is the interaction between art and the reader where we fill in the blanks:

Scott gave us the 24 Hour Comic, the idea of the Infinite Canvas (going bigger than just panels and the page), and the Creator’s Bill of Rights (which I’m pretty confident in attributing to why independent creators like Image Comics got the guts to branch out from underneath the Establishment of Marvel and DC).

Honestly, it’s because of people like Scott McCloud that I’ve discovered my passion. It was a dream come true.

Here’s a sneak peek of my comic and a very happy me showing off Scott’s signature. I’m a nerd.