I am a self-published cartoonist and student of Comparative Media Studies at MIT. I hail from the Boston area (specifically, my true hippie/hipster homeland Somerville.) I make all sorts of comics ranging from horror to absurdist sci-fi and surreal memoirs, and I get really excited about weird formats for print comics (choose your own adventure comics, expandy comics, comics on mobius strips!) I’m a huge fan of squid. You can find my work on Tumblr.

What do you do? (Write, draw, edit, publish, promote etc.)How did you get started doing that?
I write, draw, and publish all of my own comics. I know that other people split this stuff up sometimes, but that just seems strange to me; when I have a vision for a comic, I get a vision for a whole thing and I can’t really imagining handing over a part of that vision to someone else. Just not my particular thing, I guess.

I’ve been making comics since I was 12 or so, and have been drawing for even longer than that. One day in 6th grade I decided to put together two pictures and made an adorably dorky comic for pi day, and from that point on, I was basically drawing comics non-stop. (I was really bored in middle school, so I got really good at meticulously pencil-shading an entire piece of paper) The Boston Comics Roundtable was really what got me in to self-publishing. I heard that Boston had an indie comics group, so I figured I would give it a shot, and I walked into the first meeting and someone asked me if I wanted to be published in an all-female superhero anthology, so naturally I said yes. After that I realized that having published work was not just a mysterious thing that people more legit than me did, but a thing I could also do, and it was pretty much uphill from there. 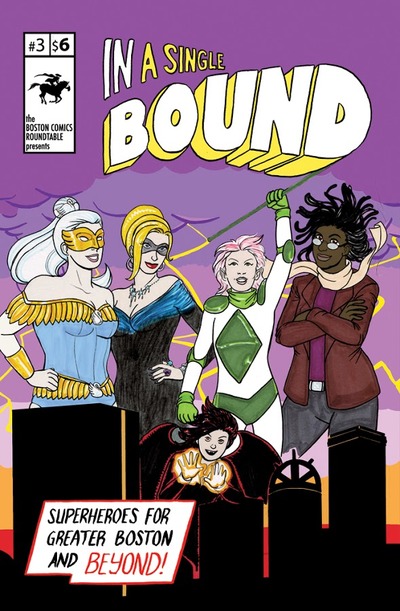 (Read her work in In a Single Bound #3. Cover not by MG.)
What was your first comic to create? Why that one? First to read?
When I was a teeny tiny kid, my dad used to read me Elfquest on the bus to kindergarten, and that’s probably the first comic I remember reading. I got really into it and assigned all the members of my family different Elfquest characters to be (I was naturally Cutter because I always got to be the main character).
The first comic I ever made was, as I mentioned before, an incredibly dorky and drawn out pun about irrational numbers. The first comic I ever published is still one of my favorite things I’ve ever written, The Misadventures of Harold. It’s about a giant squid sent into space by NASA who strikes up an unlikely friendship with Cthulhu.

Any current or upcoming projects we can find you on?
I’m currently working on two new horror comics. One of them, called The Plague, is a sort of Black Plague and medieval inspired zombie story told from the point of view of a quarantine officer. The other, L’appel Du Vide is a deterministic psychological horror story about four strangers who find themselves stranded on a mountain ledge by a sudden avalanche and one by one start to feel a mysterious compulsion to leap off the edge. I’m also working on a 1920s horror story for the Simply Sinful Hellcat Press anthology (coming October 2016). And, for those of you who aren’t all about the horror, I might also have a San Francisco city planning dystopia in the works as well.
Favorite inspiration, collaborators, other professionals you’ve worked with if any?
I really love German expressionism, especially German film from the 1920s. Metropolis and The Cabinet of Dr. Caligari are big influences. In fact, some of the first “graphic novels” come out of that same period with artists like Lynd Ward and Frans Masereel making “novels in woodcuts,” so those are big inspirations for me too. More in the realm of modern comics, I really look up to Aaron Diaz and Molly Ostertang for their awesome styles. And, as a horror comics influence, Junji Ito is basically the reason I ever started writing horror comics. I don’t agree with everything he has to say, but as a comics theorist as well as a creator, I do appreciate Scott McCloud a lot for helping to establish comics as a thing a person could do academic work about, and he’s been somewhat of an inspiration for me as a scholar.
Favorite genre to read? To work in? Are there any you won’t work in?
I really like reading weird Sci-Fi with lots of world building and robots and artificial intelligence, and that’s fun to write too. Lately I’ve also been doing a lot of reading and watching in the “cool people doing dumb things in space” subgenre of sci-fi. I love writing horror, and theoretically love reading it, but I’m actually a bit too much of a wimp to read too much of it and I have to pace myself so I don’t get too freaked out to sleep or anything. I like a whole bunch of genres though and a lot of weird stuff which doesn’t really fit into any of them.

(More info about Spellbound, an Urban Fantasy anthology featuring her! Cover not by MG.)
Coolest moment you’ve had as a creator?
Once upon a time, I was tabling at a con and this little kid walked over to my table with their mother and grandmother. The kid picked up one of my comics, so I mentioned to the mother that the comic had some nudity in it, (nothing too scandalous, but there were some naked people), so the mother makes the kid put the book down, and is about to walk away from the table, but the grandmother just picked up the book and goes “oh! Where are the naked people!” and keeps trying to show them to the kid. I had absolutely no idea what to do, but it’s probably my favorite moment I’ve ever had at a convention.
How do you think the current comics industry is toward women? What can we do to improve it further and create a safe space?
I think it really depends where you’re hanging out. There are defintely many more spaces where women creators are totally accepted than there used to be. The Boston area’s generally pretty good at this, I think as are most indie comics spaces that I’ve been involved in. There’s still at lot of sexism in the world at large though and it can definitely be discouraging for women who don’t live in liberal urban areas, and I think that it won’t go away completely until the mainstream comics industry gets with the program.

(An excerpt from a Sandman fan comic, read it here!)
What do comics mean to you?
To me, comics are the way that the stories in my head become stories that other people can read. For some other people that’s books or music or movies, but for me, I think in comics. On top of that, to me comics are a really cool medium like no other that people are still figuring out how to use and coming up with bizarre and innovative uses for all the time, and I think that’s really awesome. I think that there’s just so much to be done with the weird quirks of the comics medium, like the way it collapses time and space into the same dimension and uses a visual vocabulary like language.
What are you currently reading?
Right now, I’m reading a lot of early manga by Tezuka (Metropolis, Phoenix and The Book of Human Insects were all on my recent reading list) I’ve also been reading up on horror comics for a research project for school; a whole lot of Emily Carroll’s stuff (which is AWESOME).

—
Want to join the project yourself? Email ab188302@reddies.hsu.edu or hit me on twitter@Beebidon!