I got back late Monday night from my second Comic Con International and my first time being a presenter. I was on one panel, presented research, bought way too much art (more on that in another post with photo evidence) and met INCREDIBLE people. I walked away inspired to tears many times over.

I also got a lot of pretty cute selfies, in which I demonstrate I clearly favor one specific head tilt angle in photos.

Some of the panels that I visited include:

Wendy Pini is a delight to listen to and I’ve always adored Ramona. Listening to Casey talk about her journalism background and love of telling people’s stories + Caitlin’s comic history background felt like seeing the two sides of myself put together. It was literally what I’d been saying, what I loved and was passionate about, what I wanted to see myself doing. I was so inspired that I may have cried talking to them. I fully intend to follow up with them (yay business cards!) about working with CBLDF (Comic Book Legal Defense Fund), who does AMAZING work. (Their website is here.)I’d known about them but maybe not how perfectly it might fit me to work there.

I’ve never been much one to think about being an animator but I’m well aware of the plights they face thanks to often interviewing comic creators who are illustrators and animators. These women were funny, interesting, and had valuable information about that side of an industry that I didn’t know so much about.

(Then I had my panel, but more on that in another post as well!)

Friday morning I went to breakfast with some big names in comic creation and scholarship and was honestly so overwhelmed with reverence and nerves about saying something wrong that I was really quiet (for me at least). They were very nice but I was intimidated and felt kind of a little shamed when I said my first comic was Deadpool. (I didn’t say it was my favorite, just the one that I remember reading first! Sheesh.) 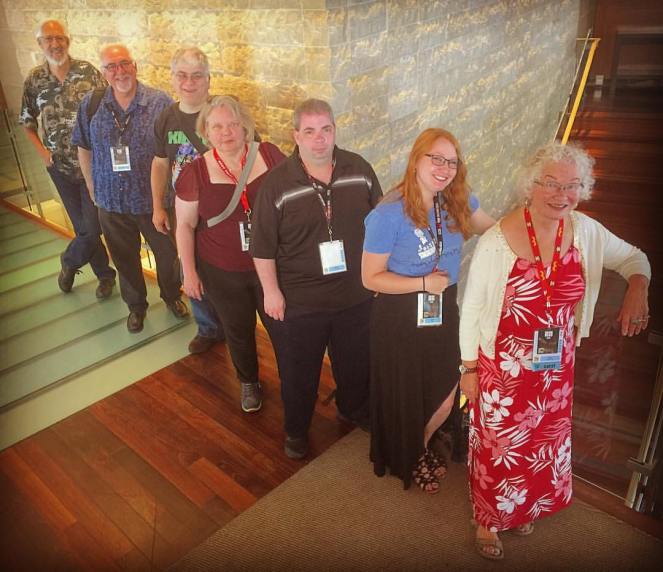 (From left to right: Steve Leialoha, Marc H. Greenberg, Mark Badger, Kim Munson, Jamie Coville, me!, and Trina Robbins. Missing from the photo were Nicky Wheeler-Nicholson and David Scroggy, who were also there.)

Generations of Women in Comics with Trina Robbins (Pretty in Ink), Mary Fleener (Twisted Sister Comics), Anina Bennett(Heartbreakers), and MariNaomi (Turning Japanese) and moderated by Nicky Wheeler-Nicholson (The Major Loomed Like a Superman).

Look, I went to a lot of feminist panels. Trina, Mary, Nicky…I have a lot of idols I got to see, meet, and listen to this weekend. This was a great panel spanning different periods of time in comics and the women who walked that path. All I can say is I recommend looking up all these women. (P.s. Nicky Wheeler-Nicholson’s grandfather ran DC comics before it was DC, and kind of got tricked out of the picture before Superman got big. Boooo.)

I loved hearing about Jill Trent, Science Sleuth and her queer, smart female rulebreaking ways from Ajani, but the real interest to me was Johnathan and Ayanna’s Bitch Planet talks. Ayanna’s particularly was an interesting and thought-provoking piece, talking about the intersection of WoC and feminism in Bitch Planet. More importantly, she raised the question of who Bitch Planet really was for and the answer seemed to be white women who need to be educated about the more nuanced intersectional layers of feminism therein.

I’ve always worked very hard to be an intersectional feminist and acknowledge my inherent privilege as a cis white woman but Ayanna’s paper–speaking particularly about the educational backletters in the individual BP issues–offered perspective for me. I’ve always been stunned and impressed by Bitch Planet’s unabashed raw look at the struggles of women, especially women of color or different body types etc. It had never occurred to me, however, that this narrative was particularly geared to educate people like me to be better, and that the narrative thus might lack some things for WoC. Bitch Planet is still an incredible work, and it’s still new, but I really welcomed that perspective and look forward to following Ayanna on twitter and reading the paper when she finishes it to publish.

Comics Arts Conference #12: The Poster Session that gave attendees the opportunity to interact directly with presenters.

There was a huge list of presenters but here is mine: (Henderson State University) presents an empirical test for analyzing the representation and role of women in superhero comics.

I had a wonderful time talking to people, hearing them agree with me and ask interesting questions. I had one gentleman encourage me very highly to publish my research quickly, before it gets stolen and so he can use it in his classroom, which was incredibly inspiring!

Shout out to some of my fellow presenters:

I’ve followed Noelle since just after Nimona started and have been in love with her art style and mixes of cute, dark, and emotionally invested ever since. Her work on Lumberjanes was no different, featuring sweet and funny badass girls (including a canonly queer romance!). Listening to Noelle talk about her life as a comic creator, her journey coming out as queer, her love of background characters…brought me to tears many times. I live-tweeted a little of it:

We need more people like @Gingerhazing in the world, in media, creating stories. Her #SDCC spotlight has me in inspired tears.

Like, during the panel queerness came up and I drew in breath because it still feels so forbidden, so rare to speak of in public.

Candid discussions about what we as minorities, what POC, need as representation….Feelings are so raw there, how can people argue w that?

It was a tangible reminder, a personal flashback at my own journey (which is still very much in process as I navigate being openly queer) of the importance of representation, the frustrations I feel (and how much worse it must feel to be not cis or white while also being queer and/or dfab). We need more women like Noelle Stevenson. That’s all I’ll say. Read Nimona, read Lumberjanes.

Wimmen’s Comix and the women on this panel were trailblazers (or still are, rather!) and such a radical bright spot in the otherwise wildly gross sexist underground comix movement. They’ve recently released their complete collection and I intend to buy it the second I can. These feisty women made me so happy and inspired and I’m so lucky to have watched them walk. (Willy Mendes is making a female-centric monotheistic religion and she was so cute talking about it, someone look into that.)

Listen. I’ve never gone to, like, queer people support groups. This panel, for bi+ (fluid, pan, queer, demi etc.) was probably as close as I’ve ever gotten and it was overflowing with inspirational positivity.  I felt so included and so filled with a mutual righteous frustration about the indignities Hollywood and pop culture keep putting us through, as well as pride and bliss at how far we’ve come. I also laughed, a lot.

Overall, it was a very empowering con to be queer and to be a woman. I’ve got more to say in coming blog posts about the art I got, how my panel went, and some of the debuts of the con (looking at you, WW trailer and The Killing Joke.)