“I’m Finn, a 23 year old agender Canadian artist. I use the singular they. My main project right now is Crash and Burn, a queer space opera in print and online. You can reach me on twitter @khialest.”

What do you do? (Write, draw, edit, publish, promote etc.)
How did you get started doing that?
I write some — mostly worldbuilding, but some poetry and short fiction as well. Primarily I draw. I’m also a musician, and although I don’t compose I am collaborating with composers to keep a musical element in my works, too. My side projects tend to jump between and combine different mediums. My comic project was a result of feeling alienated by games and shows that I enjoyed, but which were set in universes hostile to people like me. I want to make equally entertaining stories where I, and others like me, can be protagonists.

What was your first comic to create? Why that one? First to read?
My first comic technically speaking was a spinoff of Bill and Ted’s Excellent Adventure that I made with my best friend in high school. It was a slightly homoerotic journey that we turned in for a history assignment. After that, Crash and Burn is my first comic! As I mentioned earlier, it’s largely a response to a hostile media landscape and the desire to see myself reflected in the things I like. I didn’t start reading comics until after I had started making one, so the first comic I ever read was Saga by Fiona Staples and Brian K Vaughan. 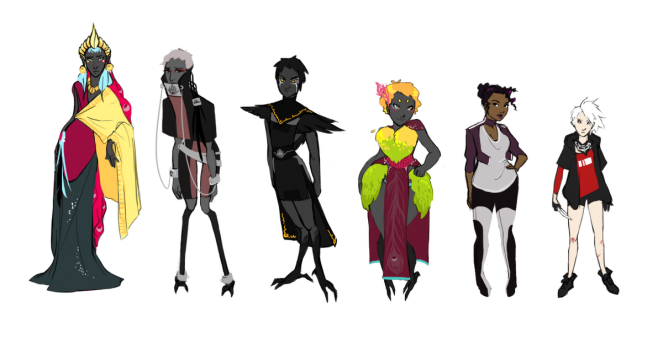 Favorite inspiration, collaborators, other professionals you’ve worked with if any?
The art of Fiona Staples, and Amei Zhao are a huge inspiration. Ariel Fiess and Sappho Hansen Smythe are incredibly talented musicians and composers who are a delight to work with on the Crash and Burn soundtrack.

Anyone you’d like to collaborate with some day? Why?
I’m not sure! I’d love to keep working with Ariel and Sappho. We have some long-term projects bubbling around, so hopefully this will come true! Otherwise, I’m happy to keep finding obscure creators who are passionate about their ideas, especially since I want to continue working in a bunch of mediums.

Favorite genre to read? To work in? Are there any you won’t work in?
I think genres are a little useless. They don’t describe very much about content. I love dwarves-and-wizards fantasy, but I also love inventive fantasy like the stuff you get in YA. That said, I absolutely refuse to read anything you would describe as a “fantasy novel,” because I find them painfully boring. So I don’t have any particular genre, except to say I love character-driven narratives that are light on plot details. I like imaginative worlds, and stories you feel you could be a part of. The only thing I wouldn’t work on is something geared at or about children. Not really in my wheelhouse.

Have you ever faced adversity/discouragement for being nonbinary in your field? How did you overcome it?
Every event, convention, or new group I attend is a gauntlet of misgendering and the variety of reactions people have to being told they just misgendered you. I’m sure I don’t need to explain what those reactions can be; some people take it better than others, but being Gender 101 for everyone I meet is exhausting. Often I feel that when meeting new creators, I have to choose between talking about my work and explaining my gender to others. I don’t know that I overcome it. It’s irritating and very tiring. I minimize my participation in spaces where I feel unwelcome. I am trying to build a better, but separate, space.

Coolest moment you’ve had as a creator?
A group of first-year college kids came to my table and told my writer and I that they’d grown up in small town Alberta where their Gay-Straight Alliance kept them away from the other students for safety. They were almost in tears, seeing something they could find themselves in. I also love how, every time I’m tabling, trans and nonbinary people come find me to talk and to lament how I’m often the only openly queer thing they can find at the event — they tweet their friends to come find me! I know I’d do the same, so seeing that look in other’s is immensely rewarding.

How do you think the current comics industry is toward those outside the gender binary, and to the concept of gender in general? What can we do to improve it further and create a safe space?
Miserable! We’re still stuck in the era of lesbians getting shot and binary trans people being used for tragedy-porn or fetishized into actual porn. I’d say the only characters that are “allowed” to exist outside the binary are robots or aliens, but even that’s not true. Cis people don’t believe a character can be relatable without a gender, so they gender things to humanize them. I think everybody needs to do a collective google, a lot of research, some introspection, and then instead of writing anything, hire some nonbinary people who are already making stories that include them. 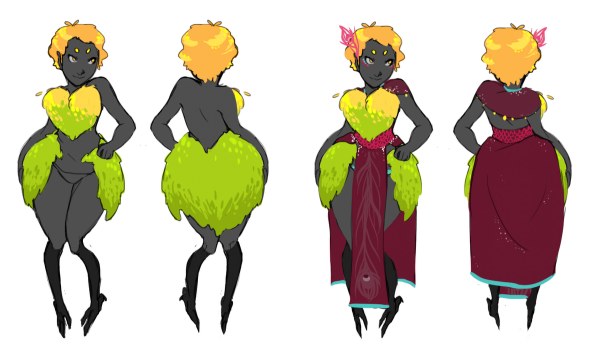 (The Orno, a bird-like race from Crash and Burn, are genderless.)

Who are some of your favorite/most inspirational characters to read? What about in other media? Why?
I love the new Ms. Marvel. The writing is fun, heartwarming, and feels very real. Kamala’s coming of age while learning to use her powers is a compelling arc. In games, I do think Zevran from Dragon Age Origins has some of the most nuanced writing I’ve seen; he’s a character who actually pulls off using humour as a coping mechanism. I think both Anders and Fenris from Dragon Age 2 also have well-developed arcs (despite other game writing elements) that show complex motivations and a lot of emotional pull.

What do comics mean to you?
Comics are a medium with a low barrier to entry; all you need is a writer and an artist, which are sometimes the same person. In that sense, comics can be more accessible to creators without gatekeepers or high budgets in the way, so a much more diverse range of stories can be showcased.

Advice to other nonbinary creators in the field?
Just keep making stuff. Be honest.

What are you currently reading?
The main three comic series for me are Saga, Rat Queens, and Princess Jellyfish.