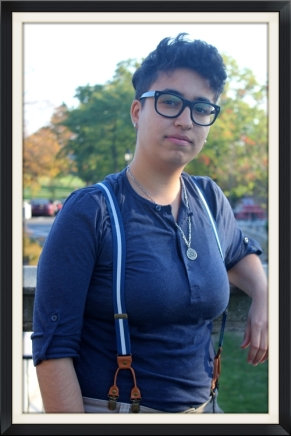 Hello! I’m Barbara Perez Marquez, my full name is fine or Barbara Perez for space saving works too. I’m 24 years old, living in Baltimore, MD with my wonderful girlfriend. I helped curate the Star Wars Fanzine: The Fans Awaken and edited En Voyage: An Illustrated Journey, I was also a contributor in the 1001 Knights anthology. My website: http://www.mustachebabs.com/ and my Twitter: @mustachebabs.

What do you do? (Write, draw, edit, publish, promote etc.)How did you get started doing that?
I write! I’ve edited and published, but I’m a writer through and through. I first started in middle school and haven’t stopped since. 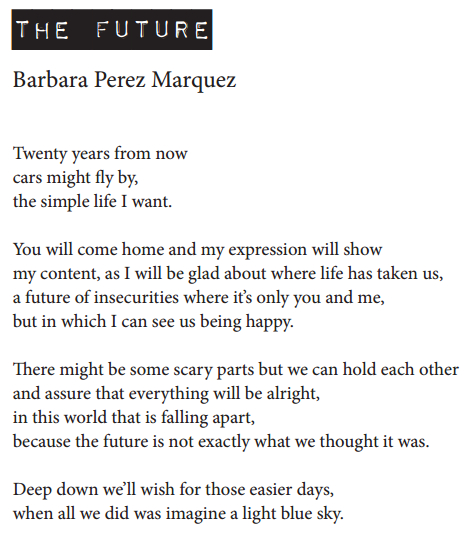 What was your first comic to create? Why that one? First to read?
I started writing comics about 2 years ago, before then all my writing was mostly fiction and poetry. I’ve had the great opportunity to collaborate with some amazing artists since then. My first official comic was actually a collaboration between my girlfriend and I for the Buff Babes Zine Vol. 2 . It was a short and sweet comic called “Awakening”. First to read? Where to start haha, I’ve read a lot both indie and big two and even online webcomics, but I have to say one of my first turns at reading comics was W.I.T.C.H., a fantasy comic by Elisabetta Gnone, Alessandro Barbucci, and Barbara Canepa.

Any current or upcoming projects we can find you on?
I currently write the comic The Order of Belfry along with MJ Barros and have an upcoming collaboration in the graphic novel The Cardboard Kingdom, coming from Knopf in 2018.
Favorite inspiration, collaborators, other professionals you’ve worked with if any?
Is “all of them” allowed? For inspiration, I read or look at art. Prompts are a lifesaver when I’m stuck in a project. Collaborators, I’ve seriously worked with some STUNNING people, but as my current on-going collaborator MJ Barros (@mjbarrosm on Twitter) has been a great support and teacher about what it takes to work and create together.

(Character guide for The Order of Belfry from Tumblr, click to enlarge)

Favorite genre to read? To work in? Are there any you won’t work in?
Magic realism has always been one of my favorites to read, my work is very influenced by folk/fairy tales and I’d like to work on a western sometime. That’s one frontier I haven’t explored yet!

Coolest moment you’ve had as a creator?
Seeing people react to my work still makes me giddy. Knowing that something I created made an impression with someone enough to tell me afterwards, I really enjoy hearing their thoughts every time.

What do comics mean to you?
Right next to fiction, they are an incredibly versatile way to tell stories! A perfect symphony between writing and art.

(Read an interview she did with other creators of the project here!)

Advice to other female creators in the field?
Do it! If you are waiting for a sign, take this one. A lot of what sets us back is our own hesitation to create and trust me, we all want to see what you create.