Find his books on Amazon.

David S. Goodsell has been an artist since he was a child and a scientist since college. He is an award-winning illustrator responsible for textbook drawings turning molecular structures into art. 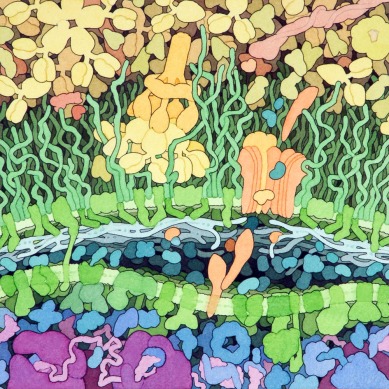 Goodsell’s illustrations feature cellular structures magnified up to 1,000,000x and shaded in bright, distinguishable watercolors to distinguish different components. Some of his drawings are done by hand; others are computer-rendered. The hand-drawn images are the ones most commonly featured in pieces about Goodsell, as he puts particular detail into rendering the tiny minutiae of these for better education of specific structures. Arecent $2.3 million grant will move Goodsell and his team to more primarily focus on computer modeling as they attempt to develop better ways to 3D model entire cells.

It is worth noting that Goodsell himself shies away from referring to his pictures at art. His primary focus seems to be on making easy-to-distinguish, scientifically accurate educational resources; the color adds to the distinguishability and the intricacy of the drawings are the intricacy of the cell, not his own creation. However, that doesn’t negate the beauty of the pieces or the fact that they might well not exist without Goodsell to draw them.

An estimated 2/3 of the various structures in molecular biology are known. That leaves an amount of guesswork as to the appearance of the other third, which Goodsell does not shy away from.

” When other people have attempted to draw cells at the level I’m doing, they simplify things by using circles and triangles to point out areas of uncertainty. I’ve resisted that because it breaks the illusion that this is a photograph or a direct representation. When I made that decision, it opened the possibility of errors being introduced, but most of my scientific colleagues understand why I’m doing that.”

(Read the rest of the interview here.)

(Check out this video by Quartz featuring Goodsell.)

The vast majority of Goodsell’s subjects are so small that even the most powerful electron microscope currently available cannot bring them into focus. In this way, we are bound entirely by the artistic renderings of scientists–many of whom, as mentioned above, are vague and perhaps not particularly interested in the aesthetic elements of what they are creating. 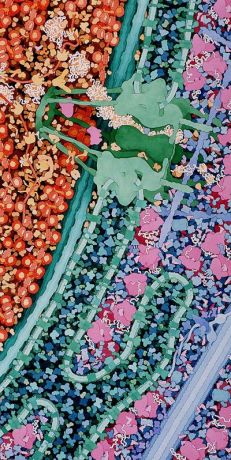 I’m going to get pseudo-spiritual here for a second. The similarities between the stars in the sky and the minutae of cells have been a fascination of mine for much of my academically-aware life. The comparisons between the veins in our body, the path of a river, and the flow of the Milky Way are a romantic vision in my life. There is something undeniably fascinating about the many intricacies of life throughout its smallest and largest iterations.

Without artists like Goodsell to illustrate these things, aspiring scientists sitting in a high school classroom might not be quite as aspiring. The nuances of molecular biology would be muddier, less available to be appreciated by those high in the  biological fields or those in a blue collar job with a hobby involving a fascination of scientific happenings. Intrigue for science–and accessibility for it as well–are what push innovation and inspire us, regardless of if you think intelligent design or some damn good genetic algorithms are what caused all of this. Science pushes humanity forward and art is what makes humanity feel so human. Goodsell is bridging the gap between the two. 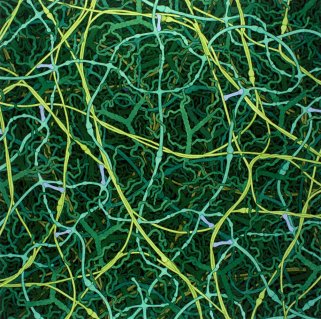