“Call me Hobo! I’m a cartoonist from Oregon and I am 900 years old, but I let people believe I’m in my 30s. I run a funny strip – Zero Explanations – which you can find on Tumblr, Line Webtoon, and ComicFury. You can find my portfolio on Behance. I created some art for Beamdog’s game, “Siege of Dragonspear.” Nothing big, just a few assets! I also moonlight as a quantum wizard and I fight space Nazis.”

What do you do? (Write, draw, edit, publish, promote etc.) How did you get started doing that?
I am an artist and I primarily work in digital. I do line work and color, especially cel-shading. I write too, but I’m a better artist than I am a writer. Lettering is something I am still learning, so I guess you can say I’m wearing just a few hats! I got my start drawing from primary school and have been drawing since. College is a bit too expensive for me, so I am keeping up my development by reading, studying, and taking online classes. As a preteen, I attempted to write a fantasy novel. I made it as far as forty-eight chapters and threw in the towel – for that project, at least. I have created worlds in my head ever since!

How did you get your start in comics? What was your first project and how did it come about?
Zero Explanations is my first comic, started back in 2015, but not regularly updated until recently. It’s my fun little dumping ground – I don’t have to push myself into exacting finely-rendered illustrations or meticulously-written story and characterization. With Zero, I experiment, crack dumb jokes, and sometimes vent just a tiny bit. It’s my “baby’s first comic” where I can practice and goof off. 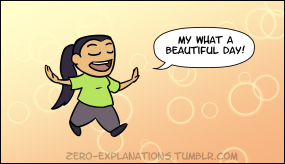 Any current or upcoming projects we can find you on?
I am working on my first serious comic called MnemoHacker, about a cyber detective hunting down a memory hacker.

Do you work solo or do you collaborate with others? If so, what are some of your favorite types of collaboration? (People you’ve worked with, style of creators you get along with etc.)
I mostly work solo but I am open to collaboration. My favorite types of collabs are with friends – my past collabs were art pieces made with friends. Along with cracking jokes, we also gave each other guidance and shared techniques.

Anyone you’d like to collaborate with some day? Why?
Oh gosh, I do! I’d like to collaborate with my best friend and mentor Mad Bee (@angryspacebee) on some mini-comics. She does Art QA at Bioware, and she fought with me in the great war. I would also like to work with Jason Song Quinn (@HulkHoquinn), who makes absolutely wild art with a punk feel (and plenty of pink). As far as writers go, hmm… I just happen to know more artists than writers! I think working with Jhonen Vasquez would be wild. I was absolutely charmed by John Roberts’ work in IDW’s Transformers (More Than Meets the Eye, Lost Light). I just KNOW a collab with Sam Sykes would be a total blast!

What are your favorite genres/styles of comics to work in? Are there any you definitely will not do?
I enjoy working in humor, cyberpunk, fantasy, queer topics, and sci-fi. Religious, sports, and westerns wouldn’t be my first choices. Witchcraft comics though? I think those would be a great deal of fun to work on! Subjects promoting discriminatory propaganda (transphobic, racist, sexist, etc.) are a flat-out NO from me. 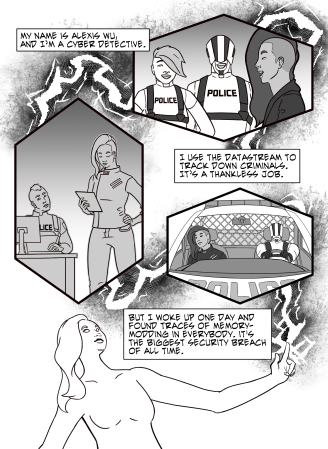 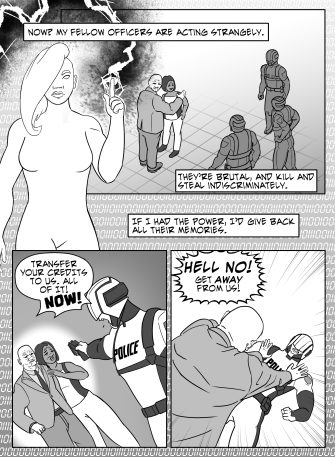 Where do you draw your inspiration from? What is it you hope to accomplish with the works you help foster?
I draw a great deal of inspiration from reading news about science and technology, anthropology, metaphysics, and philosophy. I’m definitely not a scholar of any of those subjects, but I have a layman’s appreciation. I hope that my work, first and foremost, brings a smile to my readers’ faces. I hope it gives them some food for thought, opens their minds, and I want them to be happy with what I make!

How do you feel about the current comics industry’s state? What gives you hope for the future of comics?
I feel the comics industry is in a state of flux. Small press and webcomics are booming with all sorts of fresh stories, but mainstream publishers seem to be chaotic. The market seems to be moving away from floppies in favor of trade paperbacks and graphic novels. Publishers are courting libraries and mainstream bookstores, and kids’ literature is where the money is at.

I feel that if publishers adapt to this change rather than fighting it, then the industry will thrive. I feel that we are currently in a kind of golden age for comics: there are more creators than ever. Gatekeeping is at its weakest. Anyone, absolutely anyone can make a comic and post it online for free and build their own following. There is a surge of creators who are people of color, queer, disabled, from all over the world that can have their work seen and are not beholden to discriminatory hiring practices from old publishers with an “old boy’s network” going on. Freedom has never been better!

Who are some of your favorite/most inspirational female characters to read? What about in other media (novels, TV, movies, pop culture)? Why?
Oh, a few come to mind: Black Widow, Arya and Daenerys from Game of Thrones, Jack and Kasumi Goto from Mass Effect – I just love rogues and thieves!

My all-time favorite female character would be Jane Shepard from Mass Effect – paragon alignment, of course. She’s strong, she stands up for the right thing, she shows mercy first and resorts to violence second. Though she does what is right, she goes further to challenge unjust laws and stand up against a multitude to defend her friends. She reminds me to be confident, to do what’s right, that society and the law can be wrong sometimes, that the disadvantaged should be protected, and that despite everything humanity deserves to build a better future.

Do you have any advice to aspiring creators?
I’ll be happy to part with some advice that I wish I had known when I was very young and wanting to start making comics: do not wait to be “good enough”. Do not wait for “permission” or acceptance from anyone. You do not have to go to a pricey art school (but if you do then all power to you). Make comics right now. Yes, NOW. Don’t wait, just do it.

Your first comics will not be great just like mine aren’t that great – nobody’s first comics are rock star quality – but keep it up and you will get better. You will notice a change after your tenth page and you look back at your first page and see things you can improve. See? You can do it. Just DO IT!

What do comics mean to you?
Comics means the marriage of writing and art, a marriage that births an underrepresented form of storytelling. I say underrepresented because I feel that comics are not taken seriously by society at large, especially when the medium has a great deal of merit and inherent value. Comics means community, friendship, and a new discovery right around the corner. It means I can fail and get back up again and be okay. It means I can finally set free everything I’ve ever wanted to show the world! 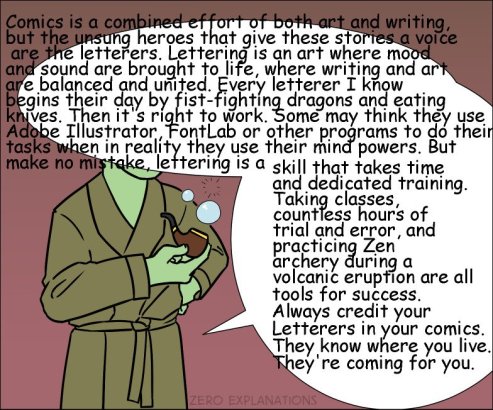 Anything else? (Free space!)
Here’s something to think on: why is a group of squids called a shoal, and not a squad? Who made that decision and what were they thinking? This is an absolute sham and I want a refund!