My portfolio / My webcomic

What do you do? (Write, draw, edit, publish, promote etc.) How did you get started doing that?
I want to tell stories, I draw, write and animate. It’s something I’ve been at since forever and I aim to make it my livelihood eventually.

How did you get your start in comics? What was your first project and how did it come about?
Comics have been part of my life as long as I can remember. Almost right after reading my first comics (healthy mix of Donald Duck, X-men, ElfQuest, Rubine and Bone), I found myself drawing my very own. I don’t think there has been a year after the age of four where I wasn’t drawing comics.

My first project would truly be my childhood comic series of three dog-lady friends, who travel the world together and go on different adventures. However, the true stars were this narcissistic parrot and a snowman that looks like a mop. I made about 13 albums of this posse from the age 4 to 12.

In my preteens I found manga and somehow everything turned from comedic adventures to edgy teenage angst, naturally. The roots of my current comic, Numb, go way back to these dark, Evanescence -fueled years.

(A page from “Numb” which updates every Monday and Wednesday.)

Any current or upcoming projects we can find you on?
My current passion project is a longform comic Numb. It’s a character driven story that’s a mixture of mystery, horror and drama. The art is done with traditional watercolors and my style takes inspiration both western and eastern comics I grew up with. I’m very proud of Numb, since it has made me grow as an artist and a storyteller. You can follow my progress from page to page, as I experiment with art and paneling. Numb is a comic that I want to play around the possibilities of storytelling with.

Story synopsis: “Levi and Sue, who attempt to meet again after a long pause in their friendship. However Levi ends up in an accident that has something else behind it than just careless street crossing. Old strains are being brought up and something sinister is lurking around.”

Alongside Numb, I’m working on a black and white horror comic collection “Peek in” which will be published in 2019. Other than comics, I’m also working on few animation shorts on a slow schedule, basically whenever I have the time. Hopefully I’ll be able to share some sneak peaks of these projects soon!

Do you work solo or do you collaborate with others? If so, what are some of your favorite types of collaboration? (People you’ve worked with, style of creators you get along with etc.)
I work mostly solo, but recently I collaborated with Ben Howard (writer) and Edwin Lopez (letterer) in a short comic Beastly Dance, that was published in Quantum Echo anthology. It was an experience I enjoyed a lot, so I’m keeping my eyes open for a change to work with other writers in the future.

With other artists I’ve collaborated in a form of group art exhibitions. I’d love to do more though. Maybe doing art trades or guest art?

(From “Beastly Dance” with Ben Howard and Edwin Lopez, read it in Quantum Echo #1)

What are your favorite genres/styles of comics to work in? Are there any you definitely will not do?
I wouldn’t say I have one favourite over others, since I prefer to mix them together, I don’t think one genre is enough to classify most stories. That being said, I’ll always have a soft spot for horror in my heart.

However, more than a genre, what interests me is what each comic will teach me. With Numb, it’s all about learning more of the use of color and watercolor technique. I have a lot of fun with working on my craft, and the greatest part of art for me is practicing, trying out new things and seeing my work grow alongside with me.

So far I’m not able to say if there’s anything I’d absolutely refuse to do (probably yes, but can’t think of anything specific). 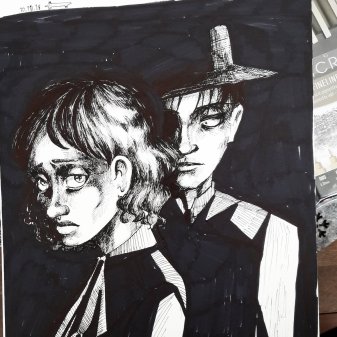 Where do you draw your inspiration from? What is it you hope to accomplish with the works you help foster?
My biggest motivation is to see how far can I go. How many stories I manage to tell in my lifetime and how far I’m able to take my craft. I want each of my works to take me to the next level.

It’d be wonderful if my work will be found by people who enjoy and can connect with it. I’m the type of reader who gets pretty passionate and talky about the works they like, and reading speculations/thoughts readers have about Numb always makes me giddy. I want to spread the love for stories!

How do you feel about the current comics industry’s state? What gives you hope for the future of comics?
I’m feeling confident about the way things are going. Nowadays you aren’t dependent on a publisher’s approval, and you can just go ahead and do your own thing. Build your audience by yourself. It’s a long haul, but I think comics have always been about that. Back in the day, you could take the self-publishing route as well, but these days with internet, it’s easier than ever.

Comics are evolving. I feel thanks to webcomics, there’s now more comic creators than there has ever been. People are still reading. There are so many different creators telling their unique stories from all around the world. And today it’s more easier to connect with all those people than ever before. For me, a creator in Finland, it’s been great to get to know to other creators from places I would have never had an access to before.

Of course getting noticed is still hard, but it has always been. I like to think it this way: instead of worrying about pleasing publishers alongside with finding the audience, now you only have to worry about that audience. No third parties.

Who are some of your favorite/most inspirational female characters to read? What about in other media (novels, TV, movies, pop culture)? Why?
I’ll give you the first three that came to mind the second I read this question!

Chris Claremont’s era Ororo Munroe aka. Storm was a character that stood out to me a lot back in the day. Her growth from a street thief to a leader of X-men through all her fears was always one of my favourite parts of the series.

Alita from Battle Angel Alita. Her name depends on which translation you read, but this woman is one of my favourite characters. She’s a great fighter who still yearns for the simple things that life can bring. Alita is someone who really grows up during her story, and that was thrilling to see.

Oscar from Rose of Versailles is a conflicted woman, who was raised as a man by her father who wanted a son. This conflict strives in deep within her as she still follows her duties with the utmost honor and love for her country and it’s people.

Do you have any advice to aspiring creators?
Trust your gut, tell the stories you’ve always wanted to be told, be patient and kind. Be crystal clear of what you want to accomplish and don’t stray from that road.

What do comics mean to you?
A lot. Is it too much to say they are a way of life for me? When I’m not doing comics I’m still thinking of them for almost every waking second. Continuing my ongoing one gives me so much excitement and the thought of what the future holds fills me with nothing but positive vibes. In short, I’m not sure what I’d be doing with my life if it wasn’t creating these stories.